The water supply to a major American city has been put at risk by its long-time arch nemesis; fire.

One of the largest bushfires in California’s history has drawn to within a few hundred metres of the Hetch Hetchy Reservoir, which is the primary water supply to the city of San Francisco and surrounding communities.

Reports say ash is dropping on to the surface of the lake that supplies the reservoir, if it gets any more contaminated the city may have to institute its backup plan to divert the water through extra filters before delivering it to homes.

Thousands of fire-fighters, teams of bulldozers and a squadron of water-dropping helicopters continue their fight to quash the inferno. Authorities said overnight that they had the blaze around 20 per cent contained, which was a significant improvement from the five per cent estimated the day before.

The newly-titled ‘Rim Fire’ has burned up 74,843 hectares since it erupted nearly a fortnight ago. It is the largest California wildfire since October 2007, according to local records.

The Rim Fire has already damaged two of the three hydropower generating stations linked to the Hetch Hetchy Reservoir that supply electricity for all of San Francisco's public facilities, such as hospitals and firehouses.

The city is drawing on reserve power supplies. Investigations into what sparked the blaze continue. 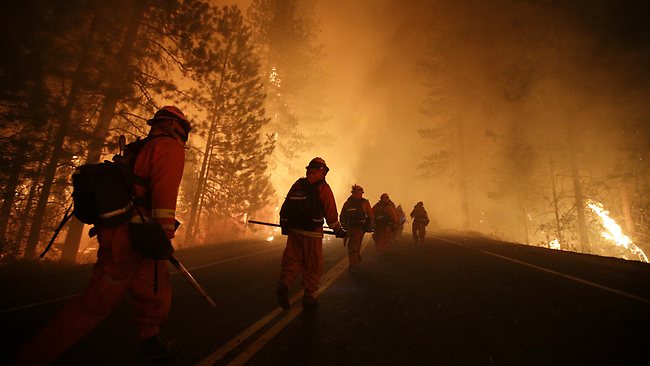