Greens push for right to shut the gate 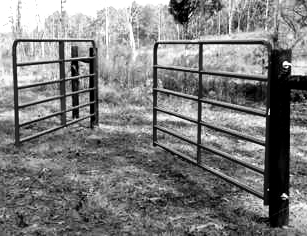 A Tasmanian Senate standing committee is reviewing a bill that gives landholders the right to refuse gas mining on their property.

The Landholder's Right to Refuse Bill 2015 was introduced by the Greens to restrict the rights of shale gas and coal seam gas mining companies.

The bill also seeks to ban fracking in Australia entirely.

It is the latest in a wave of concern raised by conservationists and landowners around Australia, who fear the gas extraction methods put water supplies and local ecology at risk.

But CSG companies say the techniques are safe, if used correctly.

Under current Tasmanian laws, landowners have to give consent to access their land at the exploration stage, but not at the production stage.

There is a five-year moratorium in place for shale gas mining in Tasmania, but exploration has not been banned.

Greens leader Christine Milne says farmers should be able to decide when companies access their land in all circumstances.

“Although the moratorium is extended, it doesn't stop exploration, it doesn't stop these companies getting themselves in a position where they can proceed five years down the track,” Senator Milne said.

“[Landowners] do not want unconventional gas companies just marching in.

“We've introduced a bill which would use the Commonwealth Corporations power to make it an offence for these corporations to come onto a property where the farmer has said no.”

“If we can get this bill up for once and for all it will indicate that farmers have got the right to say no, that fracking is banned and that will undermine the confidence of these unconventional gas companies,” she said.

Tasmanian Minerals and Energy Council chief executive Wayne Bould has told the ABC that he is worried for the industry.

“I'm always worried that bills can pass, and the fact that they pass doesn't necessarily make them right,” he said.

“There's enough empirical evidence to say that if it's managed properly and it complies with all the regulations in place at the time there isn't an issue.

“I really think it's up to the industries to make sure that they adequately detail public issues so the public understands what it's all about,” he said.

Submissions are open until May 29, and can be lodged via this page.